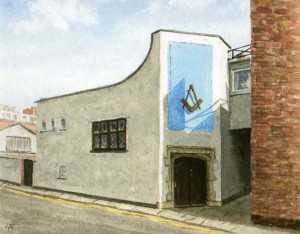 THE GLOUCESTER MASONIC HALL
Also known as The Mercer’s Hall and built in 1778 as a bonded warehouse for wines and spirits, this is an impressive grade II listed building in Cross Keys Lane, Gloucester, GL1 2HQ.

The Gloucester historian Philip Moss, in his publication Historic Gloucester, (published by The History Press) states that “the Mercers Hall appears to have been built in the second half of the 18th century as a warehouse and store.  By 1810 the lower floor was occupied by a local cider merchant and brewer who used the upper floor (now the Temple) as a granary.  In 1898 the warehouse was purchased by the well-known local firm Washbourn Bros. who used it as a bonded store for wines and spirits.  In 1926 Charles Urch converted the store into a function room and dance hall.  He also built a gallery over Mercers’ Entry to link with the catering facilities in his restaurant that fronted onto Southgate Street.  The building is now occupied by the Gloucester Freemasons who purchased it in 1955. 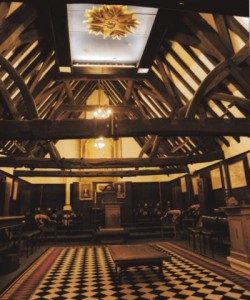 roof structure has been dated by dendrochronology to the years 1495 – 1500.  Local tradition asserts that the upper part of the building once formed part of a market house erected elsewhere in the city,  The most likely candidate is a building constructed by the Abbot of St Peter’s in 1497 that stood in the middle of Westgate Street immediately west of the High Cross.