The Crest of Innsworth Lodge 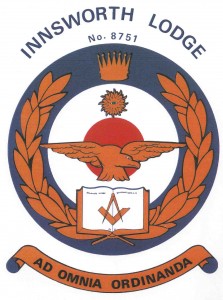 To be effective, an organisation needs a goal at which to aim and an appropriate means of maintaining that goal fresh in the minds of the members. The badge adopted by the Innsworth Lodge serves to remind the brethren, not only of their Royal Air Force connections but also of the Masonic Line and Rule to which they subscribe.

Freemasonry attaches considerable importance to colours and in this badge the normal heraldic significations are used.  They can be briefly explained as follows:

White: In the craft and throughout the world it is the natural emblem of purity, truth, innocence and hope.

Red: Is the emblem of faith, fortitude, divine love, magnanimity and, in its suggestion of blood,martyrdom. It is also an emblem of high dignity.

Yellow: Used in Freemasonry as gold, is the symbol of the glorious luminary of Nature and therefore a constancy, loyalty and regeneration.

Bearing the significance of the colours in mind, the following explanation of the constituent parts of the badge is intended to provide an introduction and pinter to ways in which further thought may be directed.

The Royal Air Force, being a military service, must necessarily be supported by a nation wide civilian organisation.  The human aspects of Royal Air Force service life are administered from the Innsworth Station by service personnel and civil servants.  Upon efficiency of this Personnel Management Centre depends the happiness and consequent efficiency of the fighting arm.  The avowed intent of this personnel function is in line with that of the service arm and succinctly stated in the Latin ‘Ad Omina Ordinanda’ which can be translated as ‘Striving for order in everything’.

Among the thousands who serve and have served in the Royal Air Force and its predecessors The Royal Flying Corps and Royal Navy Air Services are many of all races and nationalities and the legions who subscribe to the Masonic Line and Rule are not less numerous or varied.

Royal Air Force insignia included a wreath.  Here it is superimposed on the roundel and is a reminder of the departed merit, of the sacrifices made in the cause of duty and of that spirit and devotion still shown by airmen of all ranks which was so brilliantly exemplified by “The Few”.

An eagle is the universal symbol of the Royal Air Force both in the air an on the ground.  Here it is used to remind us that the heights of personal excellence can be achieved by all if the fully use the gifts bestowed upon them by nature.  Endeavour is, necessarily, personal and individual and brings to all, at time, a seclusion similar to that experienced by a lone flier.  In such seclusion the marvels and universal beauty  of nature revealed by the wonderful works of the Almighty cannot but impart feelings of awe, reverence and humility.  So, let us reflect upon the marvelous blessings with which we have been entrusted and use them to advance that professionalism which helps maintain and extend peace.

In an expanding knowledge of the universe the Astral Crown is a symbol of that foal which will forever elude the mind of man and to which all men of worth must aspire.

The “All-seeing Eye” observes and records.  The representation of the Omnipotent Power is a reminder to us to keep our minds and actions within due bounds with all mankind.  It also reminds us that there is a Supreme Being from whom we can implore aid for lawful undertakings and to whom we can look for comfort and support when distressed.

The V.S.L is here shown superimposed upon the roundel to remind us that without the proper use and understanding of the Sacred Writings the pursuit of excellence represented by that roundel cannot be successful.  It also minds us that the Three Great Lights will direct out steps in the paths of happiness whilst pointing out our duty as men and as Masons.