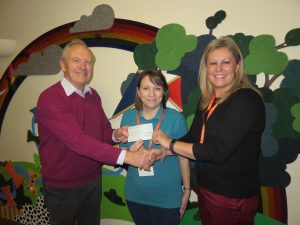 On Thursday 16 November 2017, the Head Fundraiser of the James Hopkins Trust, Barnwood, Gloucester was presented with a donation on behalf of the Gloucester Masonic Charity Action (GMCA). The donation, a cheque for £1950, was presented at the Trust Centre in Kite Lane, Barnwood.

The Head Fundraiser, Sarah James, received the cheque from W Bro Tom Robson, the Innsworth Lodge Charity Steward, who had applied to the GMCA for the grant.

The James Hopkins Trust provides care and support for life limited and life threatened cdren under the age of 6 living in Gloucestershire. The Trust is developing a project to introduce 11 weeks of school holiday respite sessions for children up to 11 years old, and this Project is planned to enable families to have a complete break while their child is cared for, in a safe and secure environment, by qualified paediatric nurses. The grant was applied for by Innsworth Lodge to fund 2 weeks of the project.

The trustees of the GMCA approved the grant application from Innsworth Lodge in early November, and the GMCA grant will enable the Project to take off sooner rather than later!