The RAF was formed on 1 April 1918 and, after their Meeting, on 28 April 2018, Innsworth Lodge (8751) celebrated the Centenary of the formation of the Royal Air Force, with a White Table Dinner in the company of their ladies. 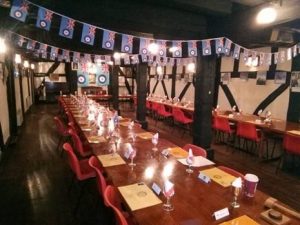 The Dining Room of the Gloucester Masonic Hall was bedecked with RAF ensigns, photographs of RAF aircraft (old and new) and a few photographs of a selection of the Brethren (and a few of the Ladies) from younger days in RAF uniform. 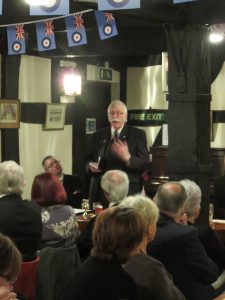 After the Loyal Toast, W Bro Peter Brindle proposed the toast to Her Majesty’s Royal Air Force; of course, there were one or two digs at the Royal Navy and the Army for good measure.

The Lodge Charity Steward, W Bro Tom Robson, held the Raffle with “unbelievable” prizes which included a brass Bristol Fighter bi-plane, a die-cast Spitfire, a die-cast Hurricane, a commemorative plate showing Spitfires over Paris in 1945 and a Teddy Bear pilot. There were also, of course, prizes of more interest to the ladies. 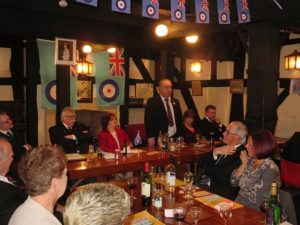 The WM auctioned a “Candlelight Dinner for Two” and the proceeds from the auction and Raffle produced a most commendable donation of £250 to the PGL, 2018 Festival.