At the Lodge Meeting on 28 April 2018, W Bro Ron Brooke was proposed and confirmed as an Honorary Member of the Innsworth Lodge (8751)

Ron joined Innsworth Lodge from Apollo Lodge (7886) in the District of Cyprus on 24 January 1998.  He was proposed and seconded by Brethren he knew in Cyprus: Bro Bert Ballard and W Bro Dennis Broughton.

He became Master of Innsworth Lodge in 2002, was appointed to PPAGDC in 2007 and promoted to PPJGD in 2014.  Ron held the appointment of Lodge Almoner from 2005 to 2012 and only agreed to relinquish the post because of his wife’s poor health.  As a ritualist he has presented some excellent pieces of work and his delivery of the 2nd Degree Tracing Board deserves particular mention.

Sadly, Ron’s wife has passed away and he now lives alone.  In addition, at the age of 97, he is not as sprightly as he used to be; although, he makes every effort to attend when he can.

W Bro Ron Brooke was granted Honorary Membership in recognition of his service, loyalty, dedication and positive contribution to the work and well-being of the Innsworth Lodge. We all look forward to enjoying the company of our new Honorary Member, in the Lodge, in the years to come. 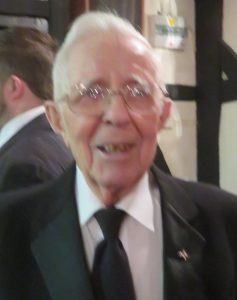