Innsworth Lodge (8751) was the scene of a very rare Initiation on 27th February 2016. The Worshipful Master, W Bro Fred Wood, had the emotional responsibility of initiating the latest, and youngest, member of the Lodge – his grandson, Brother David Hawkins.

However, it was not only his grandfather who was instrumental in creating the new-made brother; the Junior Deacon had the familiar voice of his father, Bro Anthony Hawkins, and the Junior Warden was his uncle, Bro David Wood. 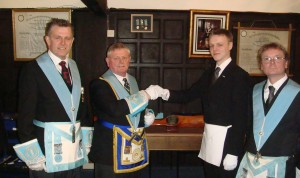 This is an eventful year for W Bro Fred Wood. Fred’s son-in-law re-joined Innsworth Lodge at his installation and he has now initiated his grandson. It is, also, expected that he will install his son, (whom he initiated in 2011) into the Chair of Innsworth Lodge in September, for the 40th Anniversary year of the Lodge.

The new member of Innsworth Lodge was formally presented with a pair of white gloves by Worshipful Master Grandad, as well as a set of the Innsworth Wings worn by all members of the Lodge. 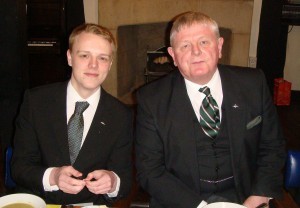 Summing up the evening, W Bro Fred declared, “Being called “Grandad” is pretty special but, having your grandson address you as “Worshipful Master” and being able to respond with “Brother”, is pretty special too!”