50 years as a Royal Arch Mason 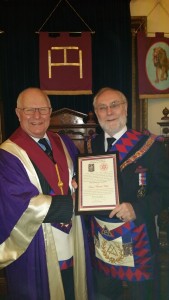 It came as a bit of a surprise to E Comp Trevor Hicks when during the risings he was called forward to receive a certificate to commemorate his 50 years as a Royal Arch Mason. The occasion was the Spring Meeting of Innsworth Chapter on Saturday 2nd April in Gloucester. Trevor received his certificate from the Deputy Grand Superintendent E Comp Ray Bennett.  It was very much an Innsworth affair because Ray is also the Chapter’s IPZ. Trevor who is currently Innsworth’s 2nd Principal was exalted into the Royal Arch in Astral Chapter No 3841 on 10th February 1966 while stationed in Lincolnshire with the Royal Air Force. He remarked when accepting the certificate that it was most pleasing that his RAF connection with Royal Arch remained so strong some 50 years on through his membership of Innsworth Chapter. Earlier in the proceedings Trevor had been elected as Innsworth’s next 1st Principal which drew a comment from the Deputy Grand Superintendent on the uniqueness of presenting a 50 year certificate to a Companion yet to achieve the 1st Principal’s Chair.

Everyone in the Chapter offers their congratulations to E Comp Trevor Hicks on his achievement and look forward to his becoming MEZ in October. Trevor is of course well regarded in Masonic circles and known to many as the Deputy Grand Master for the Mark Masons Province of Gloucestershire and Herefordshire. 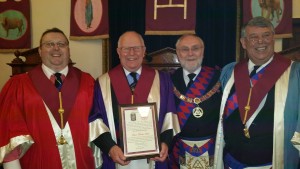 The Three Principals and IPZ