A LIFE ON THE OCEAN WAVE – FREEMASONRY AFLOAT 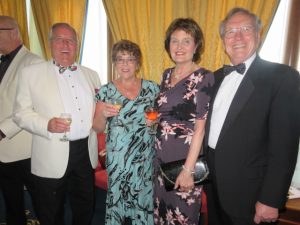 On 17 April 2016, “somewhere off the coast of West Africa”, two Gloucestershire masons joined in a Masonic Reception on board the MV Aurora.  W Bro Tom Robson of Innsworth Lodge (8751) and Bro Tim Blandford of Vasser Smith Lodge (2994) are seen here with their wives Hilary and Julie.

There were 17 Brethren attending with their ladies and, after a welcome by the DC, W Bro Richard Player of Orsett Lodge (5424) in Essex, the Chairman for the evening W Bro Alun Davies of St Davids Lodge (384) in North Wales, proposed the Loyal Toast, a Toast to the Ladies and, finally, a Toast to the Captain and the Ship’s Company of the MV Aurora.  Molly Walker, a sprightly 95 year old Masonic Widow, replied for the Ladies and Captain Peter Philpott responded for himself and his crew.  Captain Philpott was presented with £460 for the ship’s Charity, Macmillan Cancer Support. The total raised for by Brethren on the complete World Cruise (and some had been aboard since Aurora left the UK on 2 January 2016), came to £1495; £190 for Mencap and £1305 for the ship’s Charity.

Print of the program showing those attending

The Brethren responsible for the Reception, and the list of Brethren and Lodges represented, can be seen in the programme reproduced above.

Brethren who favour cruising can learn more about “Freemasonry at Sea” by interrogating the subject on www.freemasonryafloat.com.

Tom, the Innsworth Lodge Charity Steward, was very pleased that he had not had to organise the inevitable Raffle; particularly as his wife Hilary won the star prize – a limited edition P&O Monopoly set – and Tim’s wife Julie won a bottle of fine wine.  Tom declared the evening an “UNBELIEVABLE” success!

Hilary with her prize! 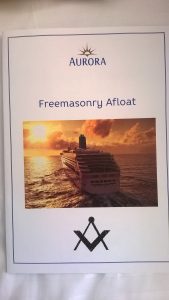 Photo of the Reception Programme Cover