For He is an Englishman! 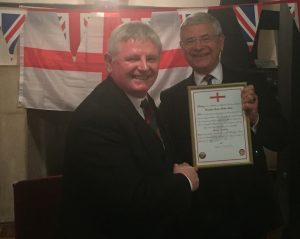 That was the resounding accolade sung to WBro Bill Beedie when he was surprised by a special presentation to him at this year’s Innsworth Lodge St George’s Day Supper. Bill, who hails from Scotland, is well known in Gloucester Masonic circles for his Burn’s Night suppers. Bill, being the great raconteur that he is, has also played his part in the Lodge’s St George’s Day celebrations and gave a stirring rendition of  Tennyson’s Charge of the Light Brigade.

The Worshipful Master, WBro Fred Wood declared that Bill’s enthusiasm in honouring St George merited him being acknowledged as an Honorary Englishman within the predicts of Innsworth Lodge.  On receiving the framed scroll commemorating the occasion a surprised Bill in response jokingly asked if this meant that he would not have to visit Scotland again.

This was Innsworth Lodge’s second St George’s Day Supper with this year’s event falling on the day itself. Some 40 plus Brethren, Gentlemen and Ladies were treated to a dinner of Roast Beef and entertained with tributes fitting the occasion. The WM, WBro Fred Wood spoke of the historical 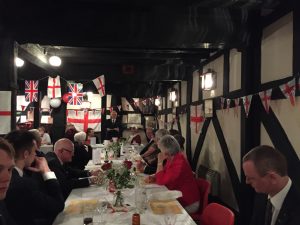 connect between England and St George and this was followed by Tributes to Shakespeare that included a stirring recital from Henry V by WBro Peter Brindle; Wordsworth and his famous poem the Daffodils from WBro Bob Coombes; a light hearted poem about  St George and the Dragon from WBro Chris Paisley and as mentioned Tennyson and his Charge of the Light Brigade from WBro Bill Beedie.

The JW Bro David Wood toasted the Ladies followed by an eloquently delivered response from his wife Nadine commemorating those fine Ladies who also shaped England.

Naturally there were plenty of good old English songs throughout the evening, sung with gusto by everyone present under the musical direction and piano accompaniment of Bro David Reeves-James.  After a raffle with the proceeds going to the 2018 Festival, the evening of mirth and merriment ended with a resounding chorus of Land of Hope and Glory.