Roll out the Barrel …. 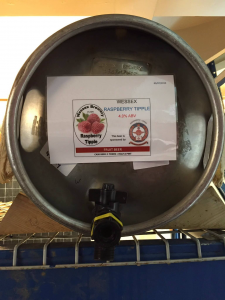 The Innsworth Barrel of Raspberry Tipple

That was definitely the view of Innsworth Brethren who attended the Eleventh Cheltenham Beer Festival on Saturday 9th July. Following the example of Innsworth Chapter last year, Innsworth Lodge decided to sponsor a Barrel of Beer at this important fundraiser for the Cheltenham Samaritans.
Well you have to try it don’t you! So several Brethren along with the Worshipful Master, WBro Fred Wood were on hand to try out our sponsored brew; a fruity little number called Raspberry Tipple from the Wessex Brewery, which they created especially for the Festival. According to WBro John Lewis, our connoisseur of fine ales, the fruity notes refreshed the palate ahead of sampling more of the forty different beers on offer throughout the day.

Although this is its first year of sponsoring a Barrel, Innsworth Lodge has had a longer 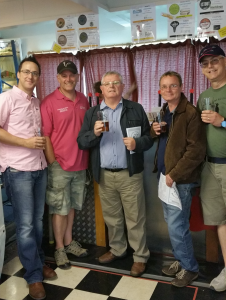 connection with the Cheltenham Beer Festival through Bro David Wood, who is one of the Festival organisers and the Chairman of the organising Cheltenham and District Friends of the Samaritans. David was very pleased with the day which as in previous years, was expected to raise £10,000 or more for the good work of the Samaritans in Cheltenham. He said that while the Festival focuses on good beer, it is in fact a family day out for everyone to enjoy; young or old.

David was particularly pleased that the musical entertainment included an impressive singing performance from his niece Robyn Laura, a promising young solo artist who is building a reputation through her performances in the Gloucester area. Robyn is daughter to Lodge member Bro Anthony Hawkins and also the WM’s granddaughter. Altogether a respectable Innsworth Lodge participation in what was an excellent day out with good friends, family and the occasional glass of beer! What will our sponsored barrel be next year? 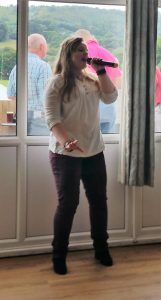