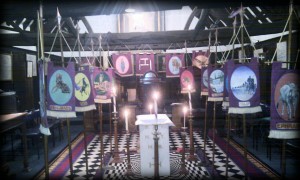 Royal Arch Masons of Innsworth Chapter enjoyed a special treat at their recent installation convocation with the presence of a full team of Active Provincial Grand Officers. In what was the first visit of its kind at Innsworth, Companions and their visitors witnessed three ceremonial processions into the Chapter. Leading the way was a masonic procession of current Provincial Grand Officers, followed closely by the Deputy Grand Superintendent for Gloucestershire and Herefordshire, E Comp Tony Stock who was accompanied by a party of Grand Officers. With his sword bearer taking point, robed and banner arrayed, Innsworth Chapter then received The Most Excellent Grand Superintendent, E Comp Graham King accompanied by 2nd and 3rd Provincial Grand Principals, E Comps James Wiltshire and Ian Moseley and the Provincial Grand Scribe E, E Comp Ray Bennett.

Everyone had gathered at the Masonic Hall Gloucester on a sunny Saturday morning in October at the Installation of Innsworth’s Three Principals for 2012-13. For the Provincial Grand Chapter Team, it was also an opportunity to witness E Comp Ray Bennett, the esteemed Provincial Grand Scribe E installed as Innsworth’s 3rd Principal. In what was a most enjoyable and memorable Convorcation. Ray as the new 3rd Principal took his place as one of the three rulers of the Chapter alongside E Comp John Keeble-Buckle, the 1st Principal and  2nd Principal, E Comp John Lewis. At refectory where everone enjoyed a hearty three course luncheon, Ray spoke of the importance to him of his membership of Innsworth Chapter and his delight at being elected to the office of 3rd Principal. We wish him well and look forward to seeing him proceed through the remaining Chairs.