The Innsworth masons were most comfortably accommodated in the Briardene Hotel, not far from the Masonic Hall, and, before the Meeting, they strolled through the land of pies and rock for a mandatory ice cream on the front!  The ice creams went down a bomb – particularly Bill Beedie’s; he dropped it! (It was, however, swiftly replaced to prevent tears!) 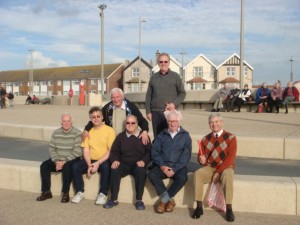 WBro John Lewis “volunteered” to act as the Candidate for a Second Degree demonstration.  He just made the grade and the ritual was thoroughly enjoyed by residents and visitors alike.

At the Festive Board, after the delicious pie, chips and mushy peas, Thornton & Cleveley Lodge members demonstrated their choral expertise with some songs unfamiliar to Innsworth ears, and the Innsworth team introduced their hosts to Gloucestershire “Masonic Fire”, previously unheard in Blackpool.

WBro John Keeble-Buckle presented a set of Innsworth “Wings” to Bro Mark Tomlinson and the visitors were surprised and delighted to all receive souvenir cufflinks specially produced to commemorate the occasion.

Brethren of both Lodges agreed that the fraternal visit had been most enjoyable and that it could be repeated some time in the future.  In fact, four members of the Thornton & Cleveleys Lodge will be visiting Innsworth at their November 2012 Meeting.

All in all, a very pleasant time was had by everyone!