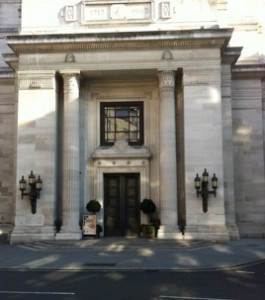 It was certainly a case of joint military operations when The Navy Lodge 2612 hosted the raising of a Gloucester mason at Freemasons Hall London. Innsworth, in true RAF fashion, answered a call to arms when Navy Lodge offered a space in their work program to fellow military masons of the Circuit of Service Lodges. Though Innsworth Lodge did not pursue the slot for itself , its secretary was able to secure this prestigious opportunity for another Gloucester lodge. So early in October, Innsworth’s father and son former army duo, WBro Fred and Bro David Wood, travelled to London with a large contingent from Civitas Lodge 5457 to witness the Worshipful Master raise one of his own Brethern during a meeting of Navy Lodge. Squaring the military circle did not stop there because fittingly the Civitas candidate was a former Royal Navy Petty Officer and the ceremony conducted by his WM who served in the Royal Signals. The evening was a great success and served to reinforce those strong bonds of friendship that typify military masons.