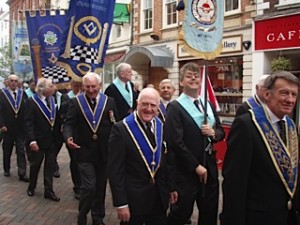 Innsworth Lodge was one of several Gloucester Lodges, who for the first time, took part in the annual Gloucester Day Parade on Saturday 1st September . Gloucester Day commemorates the lifting of the siege in 1643 during the Civil War when the City held out against the opposing Royalist army. This historical event was celebrated annually for centuries but died out in the 19th century until reinstated in 2009 as a celebration of life in Gloucester. This year, Masons joined civic leaders, marching bands and some 300 citizens drawn from groups representing all aspects of city life on a procession through though the centre. The Innsworth Banner was carried proudly by WBro John Lewis,  accompanied by brethern from the lodge.