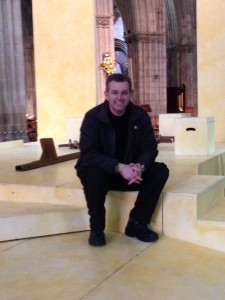 Bro Wood on the set of the Gloucester Mystery Plays

Several thousand people enjoyed the Gloucester Mystery Plays Passion Cycle staged at Gloucester and Worcester Cathedrals in  April. Both Cathedrals enjoy strong ties with Freemasonary, so it is fitting that a Mason, in this case one of Innsworth Lodge’s own, Bro Dave Wood, took on the role of stage managing these successful productions that featured a large cast of professional and amature actors; including no less, the renowned Jeremy Irons as the voice of God. Bro Dave, who has been stage managing Phoenix and Rococo Players productions since 2010 said ‘one of the most difficult challenges was the crucifixion scene where Christ had to be raised 12 feet in the air on the cross. Thankfully everything went well at each performance and the actor playing Christ survived the ordeal!’ Profits from the production will be used to support the two Cathedrals