Congratulations to our new Grand Officer 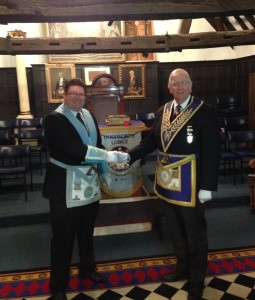 At the April meeting Innsworth bretheren had the opportunity to greet and to congratulate one of its own on becoming a Grand Officer.  WBro Peter Brindle received the office and Grand Rank of Assistant Grand Sword Bearer only days earlier from the Grand Master, HRH the Duke of Kent, at the UGLE Annual Investiture at Great Queens Street.  Peter, who is the first member of Innsworth Lodge to achieve Grand Rank since 1987, started his masonic career in the French Constitution.  As a serving RAF officer, he joined the lodge while serving at RAF Innsworth in the early Nineties.  Though he now lives in Cambridge where he is Bursar of Darwin College, Peter has remained a regular and active member of Innsworth Lodge and recently initiated his son Nick into freemasonry.  Innworth Lodge is most proud of its new Grand Officer and we wish him well during his year of active office.