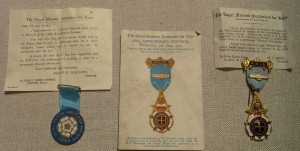 Gloucestershire Lodge Charity Stewards try a great many ways to raise money for the Provincial Grand Lodge 2018 Festival in support of the Freemasons’ Grand Charity. Innsworth Lodge Charity Steward, W Bro Tom Robson, has recently sold pieces of masonic history on ebay to do just that.
His brother-in-law had given him a box of old family masonic regalia to raise funds for the Charity and, when checking just what he had, he tracked down an interesting set of jewels and paperwork from 1943; they are shown above.

The set comprised:
1. A brief letter from the Secretary of The Royal Masonic Institution for Boys, which advised the donor that he had been sent a “token” as Steward at the 145th Anniversary Festival, and that it would be exchanged later for a metal Steward’s Jewel, as soon as practicable after the war.
2. A pictorial representation of the approved metal Steward’s Jewel, also received by the donor.
3. The actual Steward’s Jewel that was duly sent after the war, with a note advising that it was not necessary to return the “Token” to Great Queen Street.

The WWII set raised a lot of interest and, along with the sale of a WWI jewel and a couple of more recent items, a total of £200 has been sent to the 2018 Festival on behalf of Innsworth Lodge.

Also found in the box was the following notice, which shows that, even in Lodge, freemasons had to economise during WWII. 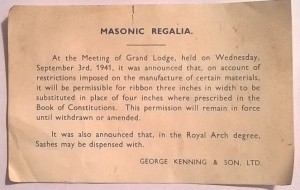 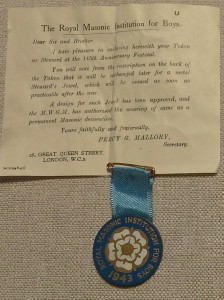 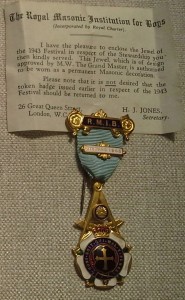