UPDATED – “WELCOME TO THORNTON AND CLEVELEYS LODGE – WE FOUND A JEWEL OF YOURS!”

The WM of Innsworth Lodge 8751, W Bro Fred Wood, was delighted to be presented with an Innsworth Lodge Founder’s Jewel on 16 October when he and 8 Brethren visited Thornton and Cleveleys Lodge (3854), Blackpool, on their annual fraternal visit.

The jewel had been discovered for sale on ebay by the Thornton and Cleveleys Senior Warden, Bro Mark Tomlinson, and eagerly purchased for the presentation in Open Lodge. The identity of the original owner of the presented jewel is unknown but it is being framed for display with another Founder’s Jewel, donated by W Bro John Iley, and the PM’s Jewel from W Bro Geoff Shore, a founding Warden of the Lodge. 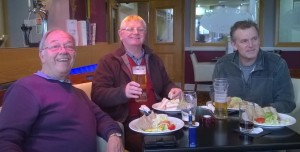 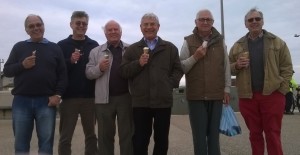 Our roving reporter captured the WM, Bro Sec and the Information Officer enjoying a quiet repast in their hotel, and also some of the Innsworth Brethren who meandered down to the seafront for a mandatory ice cream. The celebratory bottle of crusted port was donated for the Chorley Auction at the Festive Board.

The Thornton and Cleveleys Lodge return visit will be in November 2015; but, unfortunately, we do not have one of their founder’s jewel for them!

The Founder’s jewel has now been framed by the WM, along with the Founder’s Jewel, donated by W Bro John Iley, and the PM’s Jewel from W Bro Geoff Shore. They were on display above the Bro Secretary’s table at the regular Meeting on 28 November 2015 and will now be on display at all future Meetings of Innsworth Lodge.

Unfortunately, the Thornton and Cleverleys visit in November had to be delayed to January 2016 because of other commitments.” 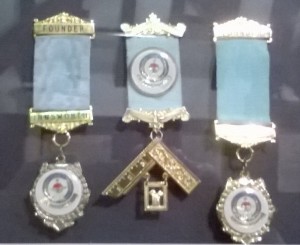