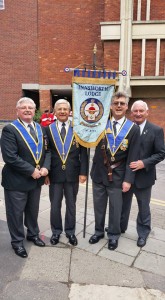 Gloucester Lodges to take part in the annual Gloucester Day procession through the City Centre. This event, which is now in its sixth year, was resurrected to commemorate the original Gloucester Day celebrating the lifting of the siege of Gloucester in 1643 during the Civil War. This important historical occasion was celebrated annually for centuries and lead to Gloucester becoming known as The City Saved by God.

At the head of the Gloucester Masonic marching contingent was the Provincial Grand Master RW Bro Tim Henderson-Ross who led some 30 brethren bearing banners of four of the Lodges that meet in the Gloucester Masonic Hall. With its strong RAF roots, Innsworth was especially proud once again to display its Banner in this glorious City that retains strong links with the RAF and more so this year when we commemorate the 75th Anniversary of the Battle of Britain.