Innsworth Lodge and Chapter (8751) held their annual Ladies Festival at the Brickhampton Golf Complex, near Gloucester, on 12 June 2015. The evening was a formal Dinner Dance with the Lodge members, their Ladies and other guests in their posh frocks/ 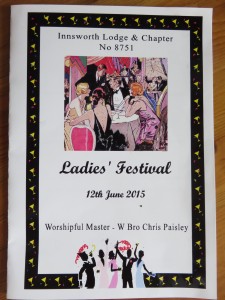 DJs, celebrating the final, programmed social event in the year of the present Master, W Bro Chris Paisley. The meal was a 3 course dinner, with a carvery Main Course, and music for dancing was provided by The Apollo Discotheque.

The Lodge Festival Committee comprised: W Bros Tom Robson and Bill Beedie, and Bros Steve Isaac and Mark Williams. Table decorations and glossy menus were created and produced by Mrs Hilary Robson. The evening’s proceedings were under the smooth control of the Lodge DC, W Bro John Lewis and “Absent Friends” were remembered at 9 o’clock. 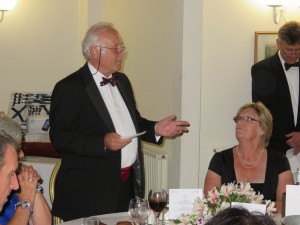 The WM gives his speech

The toast to The Ladies was proposed by the Master, W Bro Chris Paisley, and Mrs Jo Paisley eagerly responded on behalf of The Ladies – for which she was duly rewarded with a bouquet. The Brethren of Innsworth Lodge – re-designated The Innsworth Choir – serenaded the Ladies with the “Ladies Song” (revealing more enthusiasm than skill), and the Ladies Gifts were distributed and happily received. The Lodge JW, Bro Mark Cliffe, rounded off the tributes with poetic largesse! 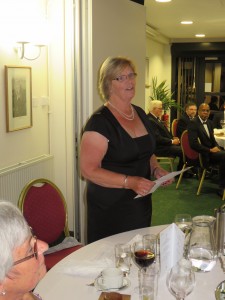 The Master and his Lady took to the floor to set the standard for the “strictly come” dancing, and many of the Brethren rushed forward (or were forcefully led) to strut their stuff! The evening was rounded off with Auld Lang Syne, and all there declared the Festival a great success!

The Raffle, organised by Bro Steve Isaac, had an “unbelievable” star prize – an HP Tablet, won by Mrs Jenny Cliffe – and the evening raised £250 for the PGL 2018 Festival in support of the Freemason’s Grand Charity. 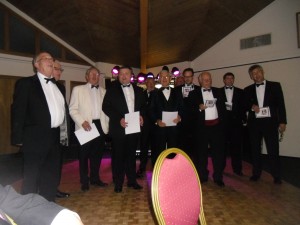