As a change from their usual annual Burns’ Night, the Brethren of Innsworth Lodge (8751) invited their Ladies and other guests to join them in celebrating St George’s Night. The occasion was a White Table Festive Board after the Lodge regular Meeting on 25 April, in the Masonic Hall in Gloucester. A total of 36 diners celebrated the Patron Saint of England.

The Hall was appropriately decked with English flags, bunting and red and white balloons, and the Ladies were each presented with a red rose by the Worshipful Master, W Bro Chris Paisley. After Pheasant Soup, the main course, naturally, was Roast Beef of Old England followed by Eaton Mess.

After the Toast to HM The Queen by the WM, the programme of toasts and extracts from English writings was directed by the DC – W Bro John Lewis. The programme included: “England and St George” – W Bro Tom Robson, “The Bard of Stratford upon Avon” – W Bro Peter Brindle, “ Into the Breach” – W Bro Bill Beedie, “The Mother Lodge”, “A Tribute to Kipling” – W Bro Fred Wood, “The Ladies” – Bro Mark Cliffe, “Wordsworth’s Daffodils” – W Bro Bob Coombes and the “Reply from the Ladies” – Mrs Hilary Robson. The final toast, in lieu of the Tyler’s Toast, was from Kipling’s “The Widow of Windsor” – W Bro John Lewis.

Organist Bro David Reeves-James provided musical accompaniment for the enthusiastic and rousing singing of “Land of Hope and Glory” and other patriotic songs such as ”There’ll Always be an England”, and St George was given a most fitting, and enjoyable, celebratory festive board.

The evening was co-ordinated by the Lodge Charity Steward, W Bro Tom Robson, and the menus were designed and produced by Mrs Hilary Robson. A total of £200 was raised for the PGL Gloucestershire 2018 Festival in support of the Freemasons’ Grand Charity 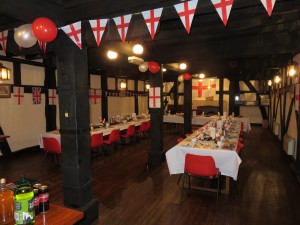 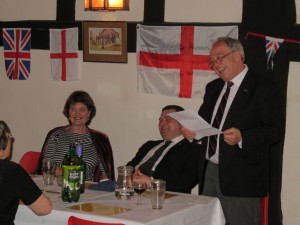 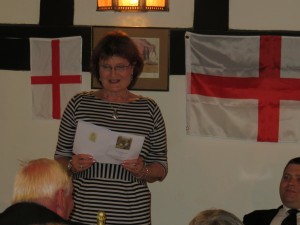 The reply for Ladies from Hilary Robson 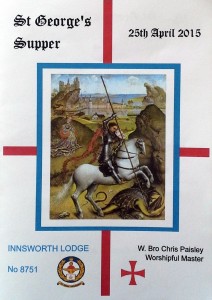 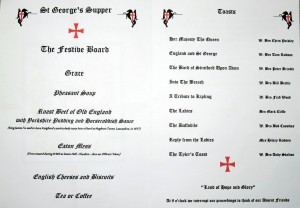