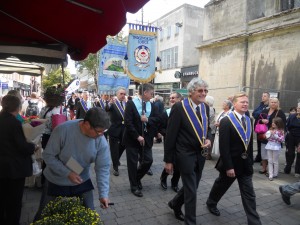 The Gloucester Day Parade took place in the Historic City of Gloucester, on Saturday the 7th of September 2013. The parade through the four main gated streets commenced at 2 pm and was led by the Mayor and Sheriff of Gloucester, in full Civic regalia.

This event was designed to reinstate the original Gloucester day celebrating the lifting of the siege of Gloucester in 1643. This occasion was celebrated annually for centuries, hence Gloucester becoming known as The City Saved by God. 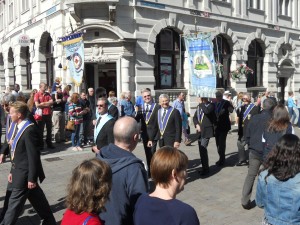 Representatives of Gloucestershire Provincial Grand Lodge led the Masonic section of the parade, and there were 2 Lodge Banners on display: Innsworth Lodge and Chosen Hill Lodge. The Innsworth Lodge Banner was supported by 4 Brethren on parade: W.Bros. Brian Ashworth (who had also manned the Outreach Stand), Bill Beedie, John Lewis and Tom Robson.  W.Bro Cllr Fred Wood was with them in spirit as he was also on parade in his Civic regalia. 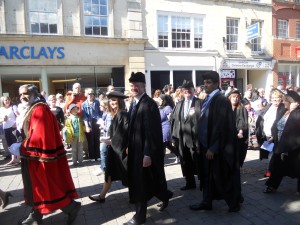