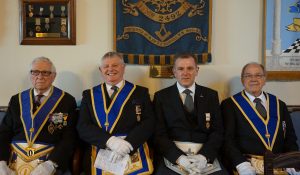 largely Royal Air Force heritage masonically at our meetings and by extending the fraternal hand of friendship to other military masons through membership of the Circuit of Service Lodges. Even in the days before the Circuit was established, Innsworth enjoyed a sister lodge relationship with Pegasus Lodge 5637. This came about because both lodges followed a RAF tradition and each was formed to provide a Masonic home for RAF brethren at local stations, albeit at different times. In the case of Pegasus the Station was RAF Halton.

Being Sister Lodges confers honorary member status on the respective Worshipful Masters. So in time honoured tradition on a warm Saturday 8th April, our WM W Bro David Wood travelled to Aylesbury in the company of his Dad Fred Wood (IPM) W Bros Bob Coombes (Secretary) and Brian Ashworth (Lodge Mentor) to enjoy an excellent evening with our sister Pegasus Lodge. We were treated to an impressive Raising Ceremony, delivered with dignity and style by the Master and his officers. The after proceedings saw us tucking into generous helping of Brisket of Beef with all the trimming followed by a mouth watering rhubarb pie that had everyone jockeying for second helpings! David and Fred each managed to win chocolates and a jar of picked eggs in the charity raffle. On the journey home when discussing the evening each was convinced who would end up with the picked eggs when the elegant prizes were shown to their respective wives. They were not wrong! We look forward to welcoming Pegasus to Gloucester later this month.